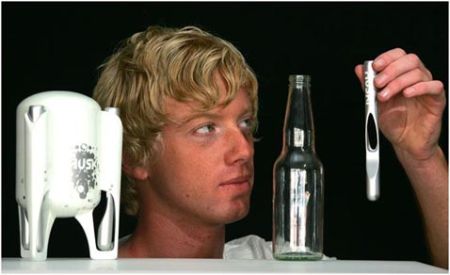 Party time and chilled beer, sound good together, but what if you run short of some cool bottles and those left are warm, or still worse the hot ones! Would you still force yourself to gulp them down, just to get the kick of the drink? No need to do that anymore, for Kent Hodgson, a 22 year old New Zealander has invented a way out for the beer aficionados.

He has named his invention as Huski, which is a handy device that needs to be dropped inside the bottle of beer. It cools your drink immediately and to your surprise, it brings it down to a temperature that is four times colder than ice.

Hodgson states that each Huski cartridge works for 30 bottles and he is presently looking for someone to market his patented product. He hopes the Huski to go for $50, not much for the miracle it performs. If I had the power, I would certainly honor him for such a wonderful discovery.