Home Incredible Diary Popular This Unique Living With The Dead Tradition In Indonesia Will Surely Surprise You! 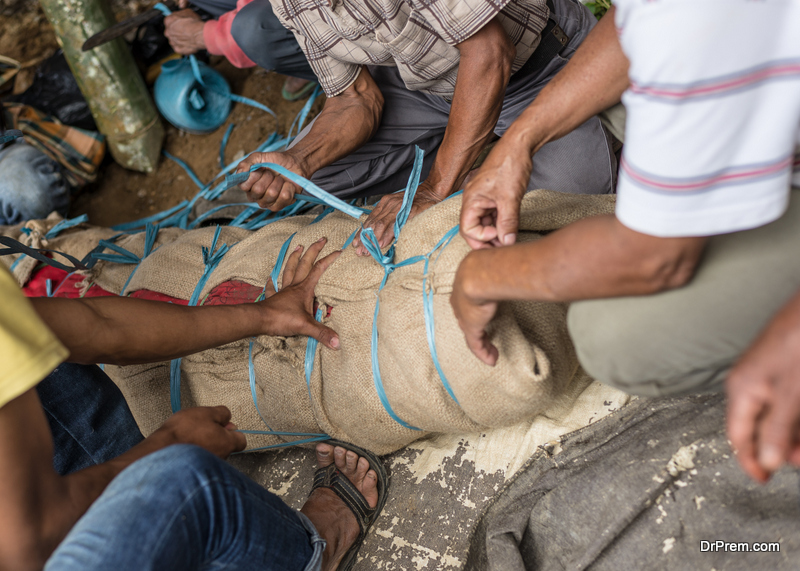 This Unique Living With The Dead Tradition In Indonesia Will Surely Surprise You!

The Torajan are a unique set of people. Numbering well over a million, this Indonesian tribe is found in the South Sulawesi region of the country and is renowned for their affinity towards anything related to death and the afterlife.  From elaborate wood carvings and fancy burial sites to the funeral rite ceremonies which last for days, clearly there is a kinship of sorts for these people towards the subject of death. But one tradition in particular is rather  eccentric, to say the least. The Toranjans are also prone to keeping the dead bodies of their relatives in their own homes, sometimes for years. Living with the dead tradition in Indonesia’s tribes has bought the entire region some distracting fame, but there is so much more to it. After all, a tradition dating back centuries couldn’t just be taken as an afterthought. Let’s have a look at this fascinating practice.

Keeping a dead body at home: An overview

As stated above, this tradition dates back centuries and prevails among legacies. The earliest beliefs are in tune with a pantheistic approach to life and death. Keeping a dead body at home also has certain rituals and rules which need to be maintained. For example, lower rung citizens can only keep bodies of their families and relatives for a number of weeks whereas the higher-class citizens are allowed to keep theirs for years. The funeral ceremonies, which are usually held in the hot months of July and August, are a massive occasion among the tribe and even among the tourists who can have firsthand experiences of the rituals. A living with the dead documentary feature based on the practices of the Toranjan tribe has been critically lauded and appreciated mainly because the practices seen are not creepy or strange but a rather different take on life after death.

Living with the dead tradition in Indonesia- The process

Living with the dead tradition in Indonesia, Toranjan tribe has a strange way of affecting the senses, especially if one were to observe the daily happenings first hand. The corpses are injected with Formulin, which acts as a preservative and stops them from decomposing. Utmost care and respect is provided to the body, which is cleaned daily as well as clothed and fed. They are provided with their own rooms and even their dirty clothes are washed. A bowl is placed in the corner of the room they inhabit, and it implies toilet and hygienic usage.  Food is provided twice a day along with cigarettes in some instances. Some families pray with their dead relatives and others leave the lights on in the evening, just as they would for a living, breathing person. Whether the body stays for a few weeks or years is irrelevant, everybody is given the utmost of respect.

Preserving the dead and keeping them hidden in a basement is a staple of science fiction and horror literature; but something similar happens in the real world. For most of us living in the modern world, the very thought of looking at a dead body is considered surreal; but the truth is that death is often described as a prolonged sleep in all of human history. The tribe of the Toranjans clearly takes this notion seriously. This tradition truly honors the dead.

This Unique Living With The Dead Tradition In Indonesia Will Surely Surprise You!   was last modified: May 4th, 2020 by Dr Prem Community Writer
dead body at home; livingdead documentarydead traditionFeaturedIndonesiaTopTorajanUnique Living

6 Elegantly Designed Cafes Around The World

The Unsung Heroes Of The Civil Rights...

These facts about The Blue Whale will...

5 Incredible Advances in Vision from Israel

8 – Deadliest Special Forces in the...