Lord Cockswain’s Ray Blunderbus is a combination of old and new!

Lord Cockswain’s Ray Blunderbus, ‘The Unnatural Selector’ is weirdest, yet the most stunning firing machine I’ve ever seen! It audaciously flaunts its trigger mechanism yet reveals an artistically curved handle. When it comes to its purpose, the Blunderbus is capable of causing enough mayhem that it can ruin an entire herd of ferocious African elephants in its single blow. However, me thinks its more like a distant vintage piece or could be even called as a weapon of a near-future superhero! Well, I hope that’s what hunting enthusiasts will feel it like; a possession of a super-destructive weapon certainly makes the owner feel ‘mighty’, ‘giant’ or above the world! This mighty weapon has been built up of metal, glass and Venusian Worm Oak and is currently being displayed at Grordbort’s labs. Manufacturers have no plans to erect batches of the Blunderbus and trigger off the third World War; even if it does it will be a very limited pieces for enthusiasts to lay their hands upon! If you are the one interested you can register here. These guns are going to turn out to be a nightmare for wild folks as you blow off the skulls of wild boars or rouge wolves (or even Warewolves!) 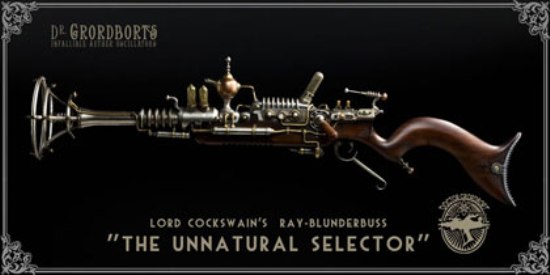 Lord Cockswain’s Ray Blunderbus is a combination of old and new! was last modified: August 18th, 2008 by Community Writer | Community.Drprem.com

‘One’: Cycle that can be packed!

The coolest fashion choices for your front...

New jean options in the market for...

The ‘Cuddle Your Capon’ Device