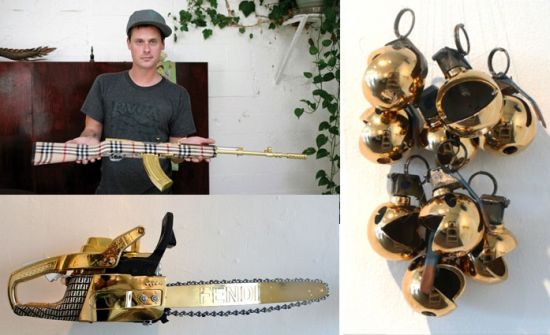 Of course, no one can take this lightly, the matter is seriously designer! Kill in style with the designer arms with Peter Gronquistâs tagged weapons. Unique is his art and even more stunning are his expression in terms of designer hand-grenades and guns.

Peter Gronquist has created many awesome designs but his expression to design is not done on some oil paints or on cloths but on arms and ammunitions. He paints handguns with a Spanish flavor to it, makes a hand grenade look less dangerous in a Pac-Man design, makes gold plated chain saws, makes Russian rifles look fit for a classy wall shelf. He buys these armaments and transforms them into art sculptures like magic and sells them for an eye-ball-pulled-out price.

Think about a shotgun painted like a Louis Vuitton fabric, Gronquist has done it all. To talk about his art, he plates the barrel and magazine clip of cheap local guns in 18 karat gold and covers the handle with designer fabric carefully taken from some Louis Vuitton or Versace outfits or bags, and a typical Gronquista art piece is ready. When he opened his sales exhibition in Los Angeles, he received some huge number of enthusiasts wishing to own one of the designer weapons. He sold his creations starting with an amazing price of $2,500.

The 29-year-old designer, who has received a master’s degree in fine arts from the reputed San Francisco Art Institute, scoffs on his own art stating everything designer finds a customer. Gronquist finds himself a place among master designers like Tom Sachs and Charles Krafft, who have made some very creative designs on arms. Gronquist creates some unique art pieces with fantasy landscapes and unimaginable creatures to formally dressed cartoon characters.

For designer Peter Gronquist, selling such designer weapons is no less than a vocation, however weird that may sound!

The most incredible “tank top” you’ll ever see