Home Off Beat iPowerRush: Boost your iPod and iPhone
Off Beat

iPowerRush: Boost your iPod and iPhone 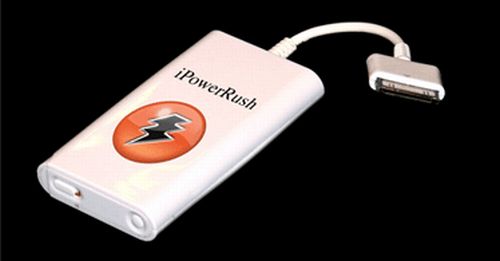 How many times have you faced the situation when you are doing something important or in middle of the conversation of your life and suddenly you see that the charge in your cell is all but over? It is in these situations that you endlessly swear and promise to yourself that you would never let your laziness allow a repetition of the same situation again. But then a week later, life is back to normal and your mobile is shouting out at you asking for some charge. I don’t know how many of you face this, but I do; and pretty much on a regular basis.

To exactly solve that problem, if not for all, at least for the iPod and iPhone owners, an Oregon-based company called Fusion Audio Technologies have announced the availability of their new power extender called iPowerRush. Why that name? Maybe, as it stops you from rushing home for powering your iPhone or iPod. Maybe it should have been named ‘iStopPowerRush’. But then that would have been a very crappy name, so maybe they dropped that thought.

With six AAA batteries, the iPowerRush can supplement an extra 10-15 hours of operation into the iPod depending on usage. Using it, iPhone battery life is extended by three hours of continuous internet usage, four hours of talk time or an excellent 120 hours of standby time. This really means that the iPowerRush delivers what it promises. I think the back up is really good and it offers, most importantly, peace of mind to those who use it.

I know I’m being a bit critical, but maybe it should have been a lot smaller and something that can be fixed at some place on your iPod or iPhone. Sure, it is great when you are traveling, but what if you forget to put it in your bag or purse? I mean, can you expect a person who forgot to charge up his phone the previous night, when all was at peace, to carry it without fail during office rush? Anyway, it still is a fine little addition to your already existing electronic pile at $30. Now if only someone would buy me an iPhone, I would gladly buy this myself.

This webcam is a real sport star

Antique Guitars: A Delight to the Eyes

Justine Lai – Paints herself having sex...