Home Off Beat Extreme golf hole – How lucky are you?
Off Beat

Extreme golf hole – How lucky are you? 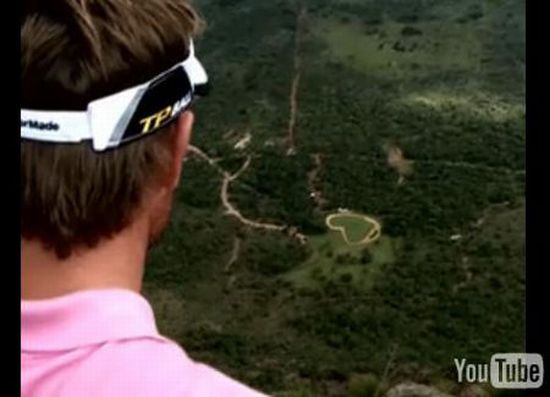 The expectation level automatically mounts when the word âextremeâ is affixed with anything. So whatâs your expectation when I say: an âXtreme Golf Courseâ, rather an âXtreme 19th holeâ? High of course! Alright, a resort in South Africa named – South Africa’s Legends Golf & Safari Resort has a very special hole 19, for which it is better known as “Xtreme 19th”. Itâs a par 3– a par 3 with a teebox that sits 1,400 feet above the green, atop a cliff on Hanglip Mountain. Check out the video after the jump.

Youâre flown in a helicopter to get to the teebox, which is about 630 yards to the pin and takes nearly 30 seconds for the ball to hit the ground. By shelling $220 (helicopter ride included), not only will you be given a bunch of souvenir swag and a DVD of your shot, but also a chance to win $1 million. How? Simple, just nail a hole-in-one on the âXtreme 19thâ. If youâre lucky, rather âXtremly luckyâ, take home the money and proudly call yourself the most Xtreme golfer on Earth!

Extreme golf hole – How lucky are you? was last modified: April 6th, 2009 by Community Writer | Community.Drprem.com

Get Hypnotized with Hypnotic Jellyfish Aquarium

Apple’s first Macintosh Plus on sale

Carry your TV along with the DIRECTV...