Home Off Beat The waterphone: Ultimate Music Device
Off Beat 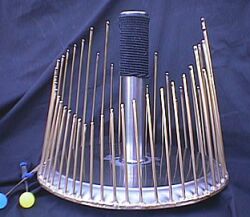 How many of you know that to make the scary sound tracks of The Matrix, Couching Tiger and Hidden Dragon used Waterphones were also used. Yeah all of us have heard the name but are actually unaware of what exactly it is.

It compromises of various bronze rods which are played with a violin bow and with water splashing around in the bottom it produces really scary sounds. Richard Water who made first ever waterphone in San Francisco more than 4 decades back holds the copyright and have made more than thousand pieces as yet.
Lots of film composers already owns one and one of its owner uses it to communicate with wales and dolphins as they love its sound.

Teddy bears that include speakers!

Camera lenses that run ahead of imagination

Ashtray to Help You Quit Smoking

Robots as a source of amusment…Sounds interesting!

Have some fun with your feet within...