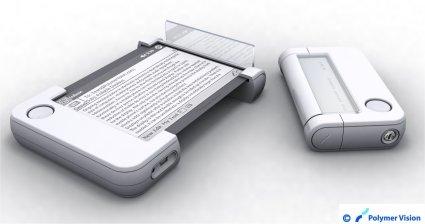 Good news for executives who are constantly on a go. Now you can read the news, text messages more clearly and conveniently through soon to be launched Royal Philips Electonics ‘Polymer Vision’. The e-reader is due to become available in April 2006.

The Electronic reader is a tablet based design which boasts of high-contrast and “electronic paper” display technology from E Ink Corp. Not only you can read but can write, mark or underline sections which gives you an experience like traditional paper. Company also claims the reader can be used outdoors

The iPod like reader has 8.1 inch grey scale display with 16-level graphics. The content on the reader can be downloaded via internet or through nearby laptops, PDAs, flash cards easily through its wireless capabilities and can be stored on its non volatile memory.

The 8.1-inch display with a 16-level greyscale combines wireless networking, touch-screen technologies and nonvolatile memory. The company said this allows content to be downloaded from the Internet, from a PC or loaded via flash memory cards. It can also capture user input.

A prototype of smaller screen size (320×240 resolution), 4 grey levels and display screen of 5-inches was displayed in September.