Japanese toymakers wanna have you bathing in cash 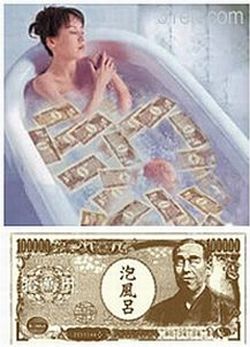 You know I always wanted to dive into a pool of cash like Scrooge McDuck from Disneyâs Duck Tales! I guess guys over at Japanese toymakers Bandai had the same fantasy because they have just launched bubble bath tablets that are shaped like banknotes! The bubble âcashâ bath comes in packets containing 10 tablets that look like banknotes of the denomination of 100,000 yen (which is ten times the highest Japanese banknote of 10,000 Yen BTW!).

The tablets fizz out creating bubbles when left in the bath. The company plans on calling the product Bubbly Bubble Bath (how original) and is looking at sales figures in the region of 300,000 packets by the end of March. Now thatâs what I call splashing out!

Mac Vs PC Chessboard – The contention...

Coolest pic of the day – Flower...